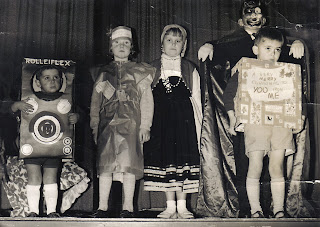 My interest in photography began at an early age, as can be seen in this rare archive photograph c. Christmas 1965 when I was aged 3.
That’s me dressed as a Rolleflex camera, obviously in 1965 cameras were a very traditional fancy dress costume at Christmas for young boys, as presumably, were devils and alpine maids! My elder brother Ade meanwhile opted for the rather more obscure Christmas present look.
Keen camera lovers out there will note that the Rolleiflex was of course a Twin Lens Reflex, mine was the rarer one lens version!

4 Replies to “When did you become a photographer?”

Scroll Up
Powered By Ultimate Auction